AST’s strength lay in its speed of execution and its remarkable value for money, but also in its audacity! In 1993 they came out with a portable computer that could be converted into a touchpad. However, the product only received some moderate praise due to the fact that this was still the 20th century and the internet ecosystem didn’t exist yet. Despite the lack of success for their novelty product, AST’s daring stood out and demonstrated that it had what it took to be amongst the greats. 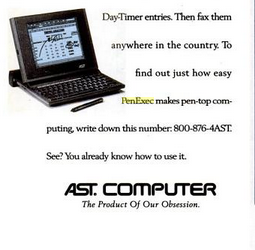